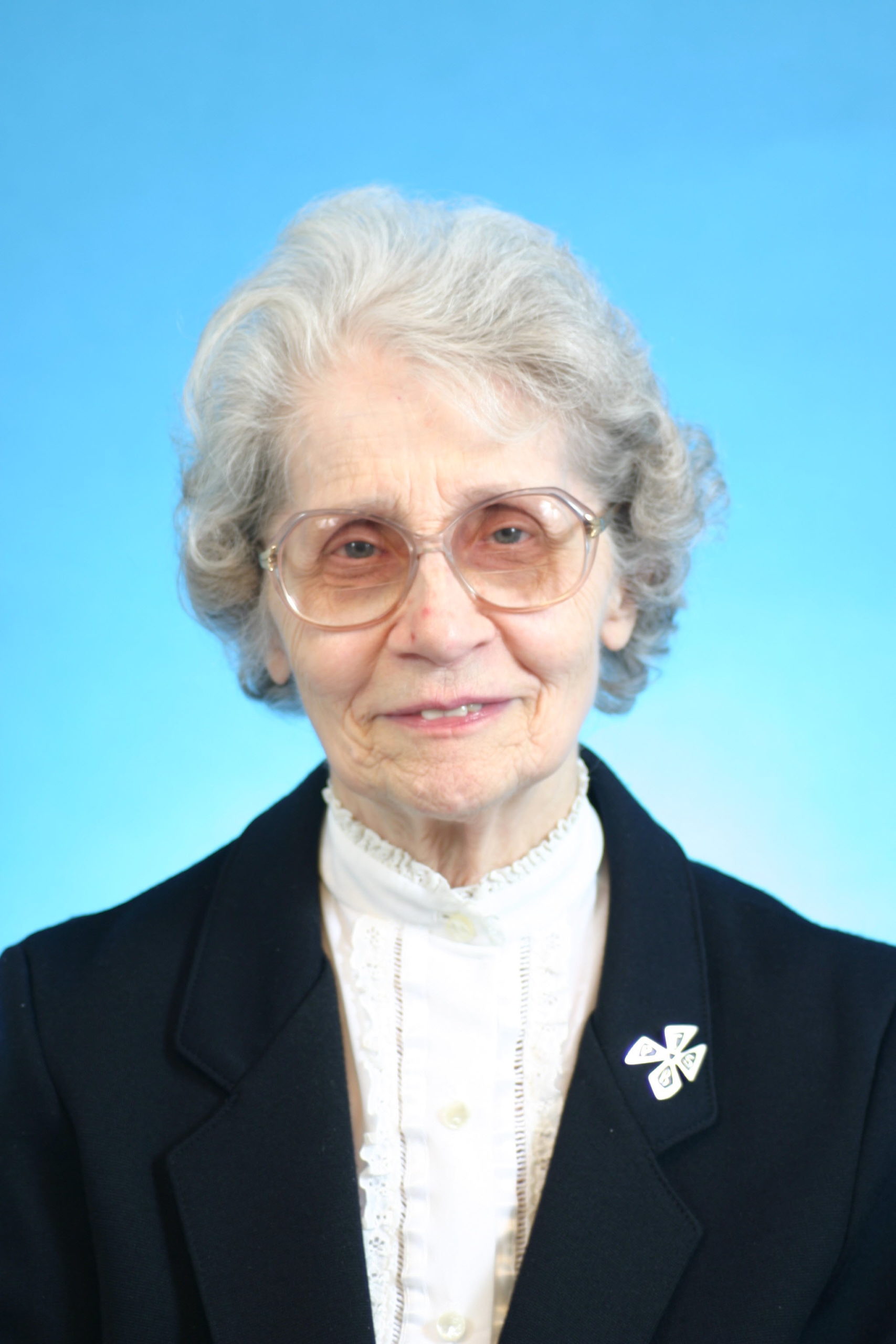 Sister Valeria Moellers, OSB, of St. Scholastica Monastery, Fort Smith, a retired Music teacher, entered into eternal life on October 17, 2013 at the age of 98. She was born on February 26, 1915 in Fort Smith, AR to John and Mary Rose Moellers. She entered St. Scholastica Convent in 1934 and made her monastic profession on June 24, 1937. She earned her Bachelor’s Degree in Music at the American Conservatory, Chicago, IL in 1955 and her Master’s Degree in Music Theory at the University of Arkansas-Fayetteville in 1963. She taught elementary Music for twenty years at St. Joseph School, Paris; St. Boniface School, Fort Smith; Our Lady of the Lake School, Lake Village; St. Edward School, Little Rock. She taught Music at St. Scholastica Academy for sixteen years. In 1972 she retired from school teaching but continued to teach piano privately until her retirement to the monastery in 1992.

In 2005, when her vision failed and she could no longer accompany the sisters during Mass and prayers, she continued to “coach” piano to the younger sisters. Four of the sisters she coached—Sisters Pat Bolling, Alice O’Brien, Therese Moreno, and Barbara Bock—are now playing the Liturgy of the Hours at the monastery. Many of Sister Valeria’s students came back to visit and renewed their fond memories of her.

She was preceded in death by her parents, one brother, and two sisters, and is survived by the members of her monastic community. 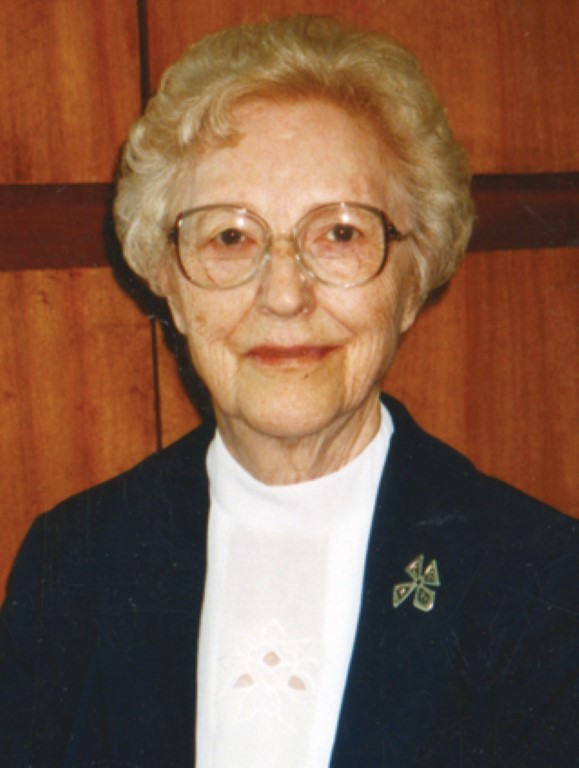 Sister Jovita Stengel, OSB, 94, of St. Scholastica Monastery, entered into eternal life on July 4, 2013. She was born Wilhemina Eva Stengel on September 7, 1918, receiving the name of Sister Jovita on the day of her religious profession, June 24, 1938. She recently celebrated her 75th year of religious life.

Vespers for the dead were held on July 7. in the Monastery Chapel. The funeral Mass was held July 8 with Fr. Mark Stengel, OSB, Sister Jovita’s nephew, presiding, followed by burial in the monastery cemetery. 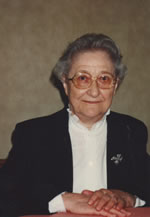 Sister Irma Twenter, OSB, of St. Scholastica Monastery, Fort Smith, entered into eternal life on April 5, 2013 at the age of 101. She was born on April 3, 1912 in Clear Creek, Mo. to John and Magdalena Twenter. She entered St. Scholastica Convent in 1934 and made her monastic profession on June 24, 1937. She worked as a housekeeper and cook in Catholic parishes, schools, and hospitals in Missouri, Arkansas, Texas and Louisiana, including six years at St. Mary School, Lake Village; and several years each in Crawford County Hospital, Van Buren; St. Joseph School, Billings, Mo.; St. Joseph School, Amarillo, Tx.; St. Mary School, Altus; and St. Boniface Church, Fort Smith. From 1974-81 she served as the monastery seamstress. From 1988-93 she resided at St. Mary Parish, Helena, Arkansas, working in rural ministry, where she started quilting groups. Since 1993 she has lived in the monastery infirmary. During her retirement Sister Irma developed her artistic talents, painting landscapes and abstract art and designing hand painted greeting cards.

She is survived by one brother, Alfred; her nieces and nephews; and members of the monastic community. Sister Irma was preceded in death by four sisters: Frances Gerke, Emma Vollmer, Martha Vollmer, and Alice Marie Twenter; and four brothers: Anton Twenter, Carl Twenter, Urban Twenter and William Twenter. 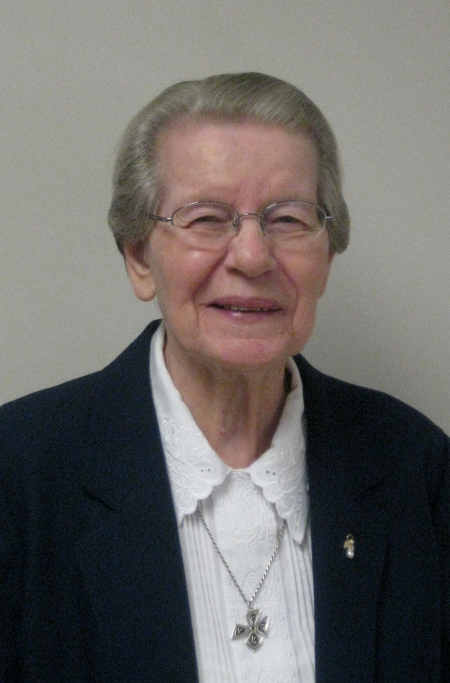 Sister Gabriel Brandt, OSB, of St. Scholastica Monastery, Fort Smith, entered into eternal life on April 4, 2013 at the age of 84. Delphine Brandt was born on December 13, 1928 in Edwardsville, Ill. to Joseph and Rose Schmidt Brandt. She was an office worker for the Sinclair Company for twelve years before joining St. Scholastica in 1958. She made her monastic profession on June 24, 1961, taking the name Sister Mary Gabriel. She taught school for seven years, at St. Scholastica Academy; St. Pius X School, Moberly, Mo.; St. John School, Fort Smith; and Assumption School, Atkins. She served as procurator for the community from 1967-75 and 1985-96, and as treasurer-procurator from 1996-2002. She studied licensed practical nursing at St. Edward Hospital, Fort Smith, from 1980-81 and worked at St. Edward from 1981-89. For the past eleven years she was the liaison with the nursing supervisor in the Infirmary. She could often be heard playing the flute at Mass and prayers.

Sister Gabriel is survived by cousins and her religious community. She was preceded in death by her parents and her brother, Earl. 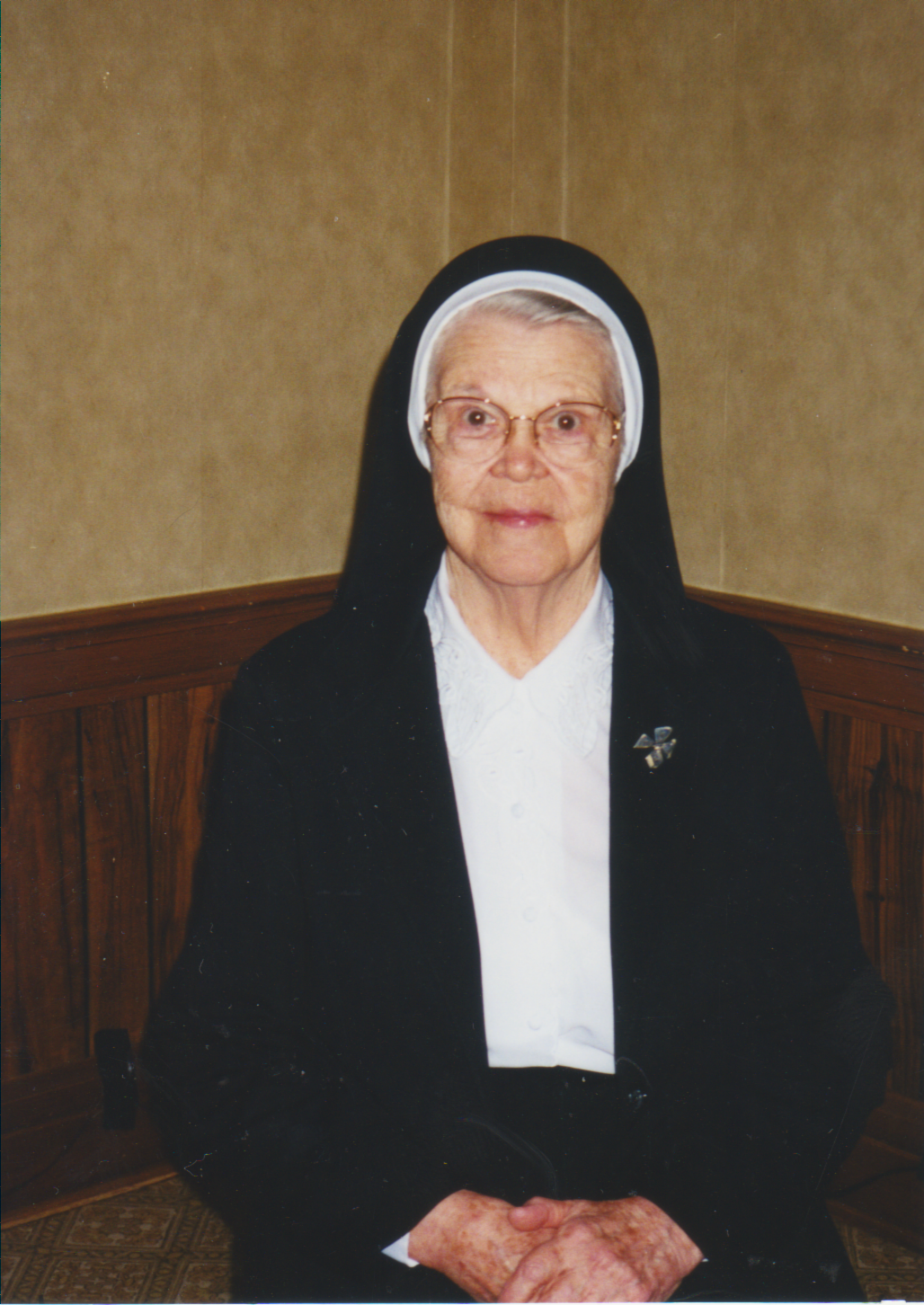 Sister Frances Anne Braddock, OSB, of St. Scholastica Monastery, Fort Smith, entered into eternal life on April 3, 2013 at the age of 94. She was born on April 2, 1919 in Blythe, Cal. to Joseph and Frances McCormick Hyland. She served in communications in the Army in World War II. She married Charles Braddock, with whom she raised seven children, in 1949. After her husband’s death, she entered St. Scholastica Monastery, joining her sisters, the late Sisters Roberta and DeChantal Hyland, OSB, there. She made her monastic profession on August 16, 1986. 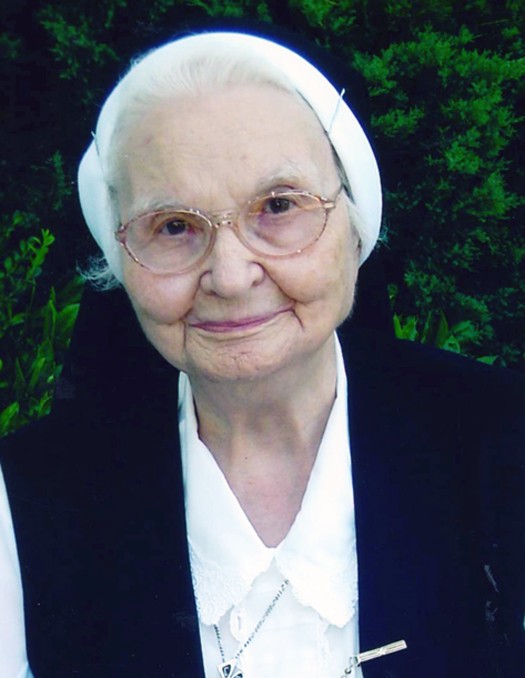 Sister Corinne Lange, OSB, 94, a nurse whose career spanned 43 years, entered into eternal life on August 7 following a brief illness. She was born on April 13, 1919 in Nazareth, TX to John and Louise Lange. She entered St. Scholastica Convent in 1934 and made her monastic profession on June 24, 1937. She earned her nursing certificate at St. Joseph’s Hospital, Boonville, MO in 1945 and worked as a nurse in Boonville, MO; Amarillo, TX; and Clarksville, Van Buren, Morrilton, and Dermott, AR for 43 years, specializing in obstetrics from 1957-83. Following her retirement from nursing, Sister Corinne did parish work in St. Joseph Church, Amarillo, TX; and St. Benedict Church, Subiaco until 1996. After retiring to the monastic infirmary, she worked in the monastery gift shop and enjoyed sewing, arts and crafts, and completing jigsaw puzzles.

She is survived by nieces, nephews and her religious family, the Benedictine sisters of St. Scholastica Monastery.

Preceding her in death were her parents; her sisters, Therese Irlbeck, Mary Dirks, Elizabeth Johnson, Sister Cordelia Lange, OSB and Anna Frail; and her brothers, Joseph, Father Cyril, and Aloys. 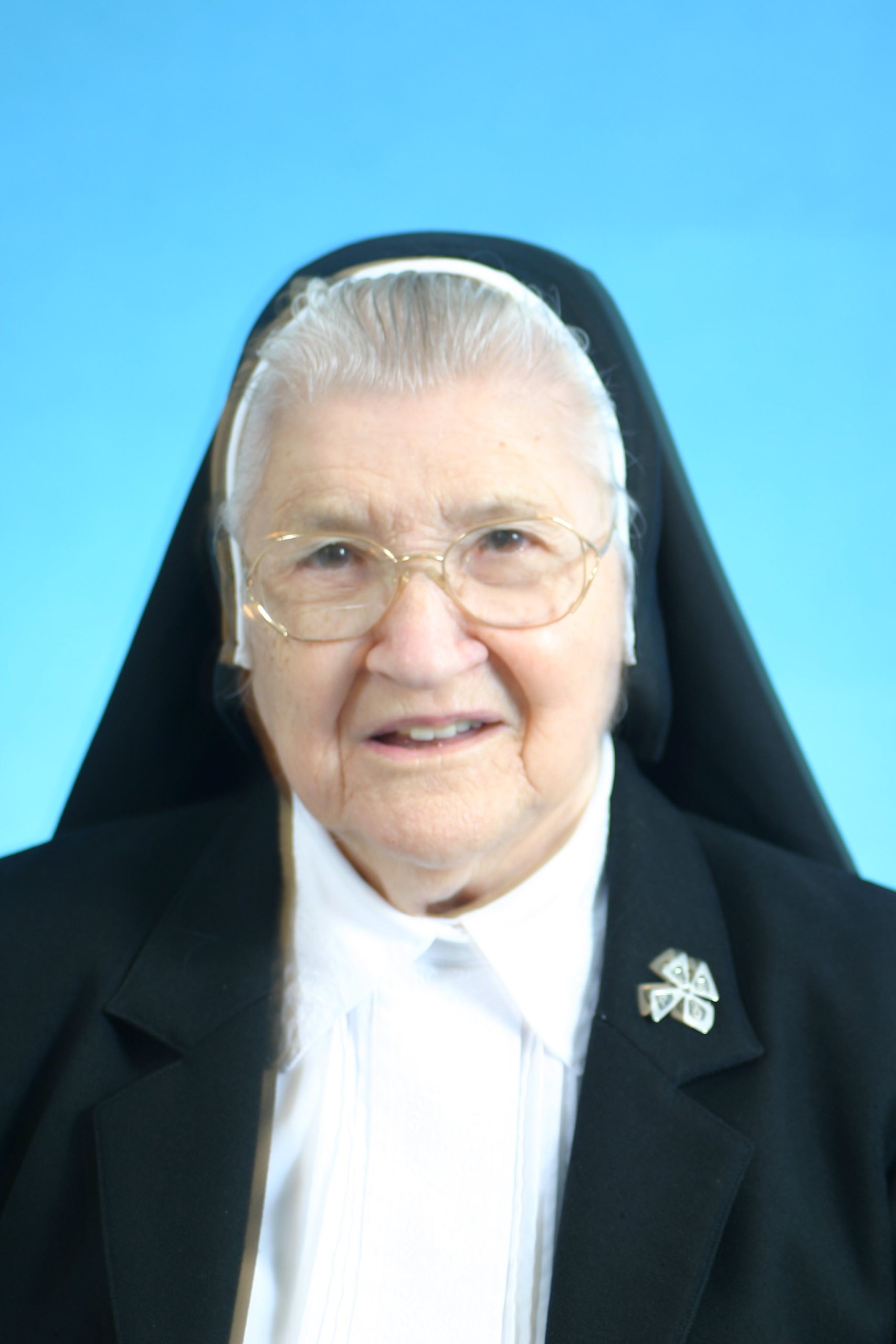 Sister Annella Reginelli, OSB of St. Scholastica Monastery, Fort Smith, entered into eternal life on October 18, 2013 at the age of 98. She was born September 25, 1915 in Lake Village, AR, to Alexander and Anne Reginelli. She entered St. Scholastica Convent in 1931 and made her monastic profession June 24, 1934. She earned her Bachelors degree in Education at Mount St. Scholastica College, Atchison, KS in 1955. Her 49 years of teaching were spent at St. Meinrad, Prairie View; St. Anne, Paris; Archbishop O’Brien, Russellville; St. Joseph, Fayetteville; Sacred Heart, Verona, MO; Sacred Heart, Charleston; St. Mary, Lake Village, and St. Joseph Orphanage, North Little Rock, where she was the administrator from 1955-61. After her retirement from teaching at age 72, Sister Annella returned to St. Joseph’s, doing child care in their day care center until 1997. She was proud of her rose garden and was delighted to share her roses with the sisters.

Sister Annella was preceded in death by her parents, four sisters, and five brothers. She is survived by the members of her monastic community

Sister Anne Heim, OSB, of St. Scholastica Monastery, Fort Smith, entered into eternal life on January 13, 2013 at the age of 99. She was born on July 21, 1913, in San Francisco, CA to Philip and Alice Heim. She worked as an administrative assistant for the U.S. government in Washington, DC and San Francisco. She became a member of the School Sisters of St. Francis, Panhandle, TX, in August, 1965. She transferred to the Benedictine Sisters of St. Scholastica Monastery in 1981 and made her final profession as a Benedictine on January 1, 1984.

She earned her B.A. in English at Chestnut Hill College, Philadelphia, PA in 1964 and her M.Ed. in Reading from West Texas University, Canyon, TX in 1979. As a Franciscan sister, she was a bookkeeper-secretary in the Children’s Home and taught in elementary schools in Dalhart, Pampa, and Borger, TX. At St. Scholastica Monastery, she taught in St. John School, Russellville; St. Boniface School, Fort Smith; and St. Vincent DePaul School, Rogers. She also served as principal at St. Joseph School, Paris. Upon her retirement from teaching in 1985, she worked as a receptionist at the Fort Smith Office on Aging until 1987. After retirement, she was secretary-bookkeeper in the retreat center office, took care of the Host Department and the Trinity Junior High School Chapel, engaged in pastoral work, and tutored for the Fort Smith Literacy Council.

Between 1986 and 1994, the monastery and the Area Agency on Aging contributed toward Sister Anne’s activity as a race walker for the Senior Olympics in city, state, and national competitions. During this time, she won 18 first place medals, two second place medals, and one third place medal for race-walking in 400, 800 and 1500 meter races and stationery cycling, all in the 75-79 year age group. She was featured on AETN TV as a senior who exemplifies physical fitness.

Her funeral Mass was celebrated on January 17th with Reverend David McKillin, OSB, presiding, followed by interment in the monastery cemetery.